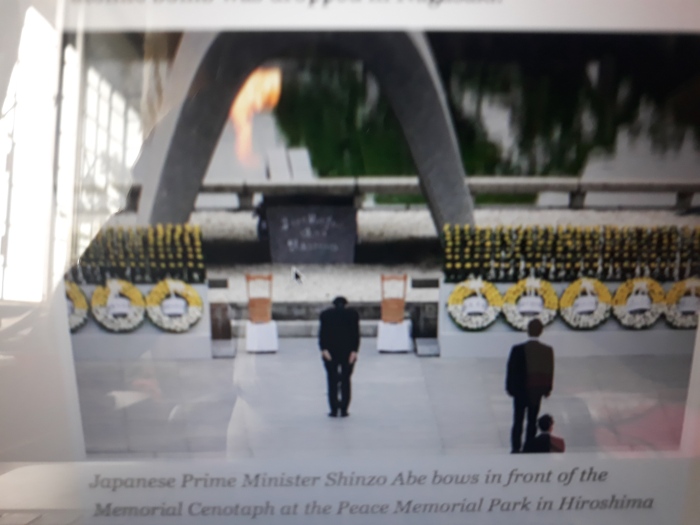 Hiroshima , the city of Japan remembered the 75th Anniversary of the world’s first atom bomb attack on Thursday 6th August 1945,killing 1,40 000 people instantly. however the total death mounted up to 300,000 including the radiation cancer related deaths in the aftermath.

just three days after on 9th August 1945 another bomb was dropped on Nagasaki. For

The Japanese had no idea what had practically happened.

Soon after the explanation came from no other person than the President Harry S. Truman of America himself.

The President Harry S True man said: “Sixteen hours ago an American airplane dropped one bomb on Hiroshima, an important Japanese army base. That bomb had more power than 20,000 tons of TNT. … It is an atomic bomb. It is a harnessing of the basic power of the universe. The force from which the sun draws its power has been loosed against those who brought war to the Far East.”

is to totally eliminate nuclear weapons”. “Division, distrust and a lack of dialogue threaten to return the world to unrestrained strategic nuclear competition,” he added.

He said “ we must never allow this painful past to repeat itself. Civil society must reject the self- C e n t red Nationalism and unite against the threats”.

Every year thousands throng the Peace Park in the city to pray sing but the ceremony was restrained due to Covid -19 Corona virus limited to the survivors and their families. 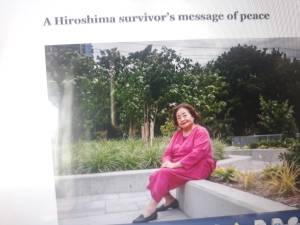 Setsuko  Thurlow merely 13 years old when US dropped the atom bomb on Hiroshima ,now 88 years old has ever since fought for the abolition of nuclear weapons ,was awarded jointly Nobel Peace Prize in 2017 for her extensive campaign against the atomic weapons and propagating the message of peace throughout the world.

she travelled to united states ,married an American and later lived in Virgina for fighting against manufacturing of nuclear warfare including Hydrogen bomb.

Recently she wrote letter to the Prime Minister of Canada Mr Justin Trudeau, asking that Canada to apologize for its role in contributing uranium to the Manhattan Project, which developed the bombs dropped on Hiroshima and Nagasaki.

The other survivor of the bombing Takona lives with his ailments and was exposed to nuclear radiations.as he was not within the radius of the blast.

In seven decades for the first time some countries , nearly two thirds of 192 members of United Nations have adopted 10 page Treaty on 7th July 2017 ; The treaty of Prohibition of nuclear weapons.

Interestingly the nine nuclear armed Countries have refused to sign the treaty on a plea being   necessary for the d e t e r r e n c e.

The warnings are not unfounded looking at the world’s Stockpile of nuclear weapons shooting up year in and year out.

The Arms Control Association estimates that there are nearly 14000 such weapons, the USA AND Russia account for the majority of these 6,185 (USA) and 6490(RUSSIA).

The other nations tally is as follows.

According to Swedish think tank (SIPRI)

The Nations across take r e course to the principle of deterrence ,aiming to prevent war and thus refuse to sign the prohibition Treaty.

The deterrence follows the rationale of the ‘first user’ principle which states reserve the right to use the nuclear weapons in  self – d e fence. a g a i n s t any eventuality of nuclear armed attack.

In short the world UN body should make the Nations to take sound steps to stop stockpiling of nuclear weapons to prevent elimination of human life on this planet.

Let us hope sanity coupled with wisdom dawns on the heads of Nations for achieving peace and brotherhood among themselves.

Thus stop using force and work assiduously to make world worth living for million of years. to come.