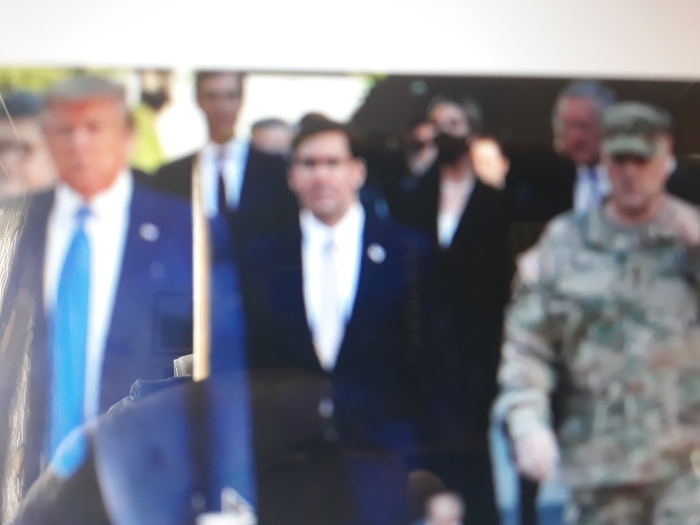 Mark A  Milley   chairman of   Joint chiefs of Staff UsA

Americans have shown solidarity first time to fight against an act of outrage of injustice   inflicted by its police force in strangulating, pinning down unarmed black American George Floyd to death in the City of Minneapolis.

unheeded by the burly white Policeman ,

Derek C h a v i n triggered country wide protests and eventually Americans are on warpath to seek drastic changes to policing in the cities of America.

The outburst is unprecedented in the history of this great nation against the police brutalities.

“Defund the police” has become the rallying point across America.

In this context nine members of the Minneapolis City Council , the veto –proof –majority pledged on 7th June 2020 ,to dismantle the City’s Police department promising thereby a new system of public safety for the city devoid of any racism.

The N.YORK Mayor De B l a s i o pledged he would divert the city funds from Police department to youth and social services.

The Mayor of New York said in the city speech ;

‘‘Our young people don’t need to be policed. They need to be reached.

And that is the spirit of the reforms we’re going to talk about today and beyond. We will be moving funding from the N.Y.P.D. to youth initiatives and social services. The details will be worked out in the budget process in the weeks ahead. But I want people to understand that we are committed to shifting resources to ensure that the focus is on our young people. And I also will affirm, while doing that we will only do it in a way that we are certain continues to ensure that this city will be safe.’’

The President Trump’s threat to send military into the states to quell the protesters over the death of black man prompted dissent from the former military leaders.

The three former chairmen of the Joint Chiefs vehemently condemned Mr Trump for sending troops to deal with domestic protests, warning thereby that military would risk losing its credibility.

Retired Navy Adm. Mike Mullen, once top military advisor to both The President Bush as well as Barack Obama told Fox News on Sunday, 7th June2020 “ we have military to fight enemies ,not our own people”.

Mr Mullen further said   “In very short order, should we get into conflict in our own streets, there’s a very significant chance we could lose that trust that it’s taken us 50-plus years to restore,”

General Mark A Milley , the chairman of Joint Chiefs of staff USA, said “ I should not have been there” in the photo – op walk of President Trump across Lafayette Square ,where authorities used tear gas and rubber bullets against peaceful protesters.

Interestingly Democratic law makers playing safe by calling for accountability thus shying away from the countrywide demand to ‘defund the Police’.

Democrats in Congress are working on some hard legislation that could make it compulsory to prosecute police misconduct and violated civil rights rather than subscribe to the demand “defund the police”.

Trump is expected formally to unveil the package

of proposals on police reforms including banning chokeholds to reassure the Americans for full justice. The president has already spoken  and   denounced

anything on Tuesday when Floyd was laid to rest

President Trump’s announcement to hold a

eyebrows ,99 years ago the site  being the worst

of slavery in United States. Ironically the racism has not abated even now.

It exists   in the aftermath of George Floyd’s killings.

The fallout has seen thousands of Americans protesting against entrenched inequalities and  seeking justice for one and all especially the lives of black.

Symbols of Past America

The protesters targeting symbols of America’s

past, toppling the statues all over .

Many statues of controversial historical eminent personalities were vandalized.

There were 11 States in the Confederacy. South Carolina was the first to secede on 20 December 1860, the other nine Sates joined subsequently namely M i s s i s s i p p i , Florida, Alabama ,Georgia, Louisiana, Virginia ,Texas, Arizona, Arkansas, New Mexico. The Civil War started because the US Government did not recognize Southern States’ right to secede from the Union.

However the Democratic Lawmakers made a scathing criticism on the move of President Trump to hold rally on 19th June 2020.

Kamala Harris tweeted “ This isn’t just a visit to white supremacist—he is throwing them a welcome home party.”

Americans are finally waking up to correct the systemic injustice of Police brutalities against black women and men.

Though the cry for “defund the police ” may not be  appropriate at the moment but the violence plagued cities need police reforming rather than dismantling it in totality.

For instance imagining NY C without Police seems in inconceivable in light of violence ridden Societies.

De B l a s i o the City Mayor does not ‘see it happening for generations.’

“You’re going to have police in New York City because it is needed for safety,” the mayor said, “but that doesn’t mean you can’t change policing.”

The protests all along America has triggered up the consciousness of the Nation to do away with Police brutalities and thus bring justice to all sections of the society.

The protestors in large numbers throng the nook and corner of the country decrying police high handedness and systemic racism. Let us wait and watch to see   whether this movement has enough momentum to bring the hoped –for changes.

4 thoughts on “AMERICANS ON WAR PATH. by Brij Kaul”