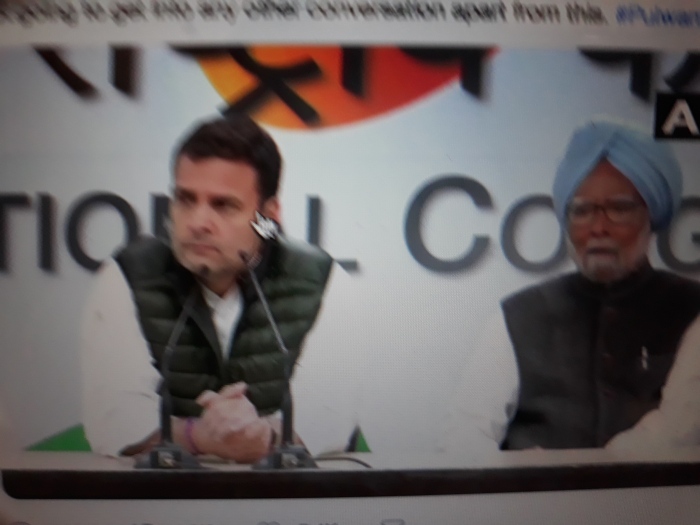 RAHUL GANDHI ON THE UPSWING

Hitting the headlines for right reasons the metamorphosis of Rahul Gandhi from the image of derision to the combative leader with confidence and conviction to excel and lead has been remarkable and rewarding.

Since he is genuinely concerned about the poor, he undertook the countrywide tours, spent time with poor people in the villages and Dalits to take stock of the problems they face so that the redressals could be thought of on ground realities.

He meets on regular basis the experts in various fields in close door meetings to seek their perspectives and possible solutions for the problems in villages.

For example the Congress President Rahul Gandhi’s political and Socio economic bombshell announcement promising his party ,the Congress ,if returning to power after Lok Sabha polls , would ensure a “Minimum Income Guarantee to every poor” ,has practically quacked earth beneath the feet of everyone. This announcement was made in a public meeting on 28th January,2019.

Immediately all political wizards of opponents or otherwise huddled together to find the mathematics of his big announcement.

Rahul Gandhi’s announcement is important in view of growing unemployment as 12.8 million youth are joining the unemployed labour force every year as per ILO’S 2018 world report.

The future is bleak and dismal.

The world is toying with idea of Income redistributing in view of vast inequalities and the threat of automation resulting in joblessness.

Rahul Gandhi’s scheme on the face of it looks meant essentially for the poor falling below poverty lines.

With his historic statement, Rahul Gandhi has changed the connotation from the job guarantees to income guarantees for one and all, irrespective of religion and caste.

Distinctively an alternative narrative , a plan to put the Congress ahead and apart from all other political parties including BJP itself.

A very clever risky move by Rahul could bring unexpected gains for the Congress or take it out from the race.

But that is what a shrewd but courageous leader is expected to do. It is not always right to keep to the left. Sometimes you have to cross the road to reach the desired destination.

Rahul Gandhi has succeeded in shaping the Congress to be the sole alternative to the BJP, win or lose.

He has rightly decided to go alone in Andhra Pradesh and fight all 175 Assembly and 25 Lok Sabha constituencies .

In UP he has decided to fight all 80 seats and has brought Priyankya Gandhi and Mr Jyotiraditya Scindia as two independent generalsectaries to handle east and west UP constitutions to win good no of seats.

Appointment of Priyankya Gandhi Vadra came as a surprise to one and all. It was announced after BSP and SP kept Congress out of the alliance.

A sound and pragmatic decision by Rahul again to play on the front foot . The Congress wants to make it clear that it does not want to be any one’s B-team.

The stronghold of BJP Eastern UP, wherefrom both the Prime Minister Modi and Chief Minister Yoginath have contested, is to be managed by Priyankya with care and aggression to bring some positive gains for her Party Congress. A difficult task but her charismatic appeal should work.

On the other hand BJP is struggling with its allies in the North east ,breaking away on the proposed changes in the citizenship laws, in UP with Apna Dal .

Rahul is emerging as a frontline leader and possibly the game changer in 2019 general elections . Taking on the Modi-Shah duo with more frequent public rallies ,media briefings on Rafal deal with sharp edged eloquence on the NDA Govt failures like rampaging joblessness, demonetization,badly implemented GST and much talked Rafal deal.

The CAG report makes assertions that the price of Rafale negotiated by present govt is 2.8% cheaper than UPA govt and delivery schedule was five months quicker than proposed in 2012.

The CAG report ,however, criticises the govt for not going on fixed price formula , a point made in dissent note of the experts in the Indian negotiating team , accepting French price escalation formula instead.

While addressing to the Congress parliamentary party on the last date of 16th Parliament session Rahul Gandhi, exuding optimism and confidence, said “We are now winning. We are defeating BJP in ideological fight. We are defeating BJP on the daily news cycle and Congress is now firmly entrenched in the mood and spirit of the people. Right now, you are thinking ‘Oh! we are 44 in LS’, you will see that the number of people standing behind you will surprise you. You will get a shock as to what is going to happen in 2019”, Rahul concluded smilingly.

Rahul Gandhi has shown his mettle in the last year after taking over the reigns of the Congress party, and winning three Hindi heartland states in December 2018 thus has evolved himself into more confident, committed ,steadfast and aggressive leader.

The election results have given him much more  acceptability as front rank leader of the opposition. This feat has motivated the Congress ,otherwise a demoralised  party forthe  last five years .

Rahul and his party has refused to respond to the BJP’s polarizing narratives like Ram temple.

Moreover what surprised every one was his aggressive attack in Parliament on the controversial Rafael deal this week targeting none other than the Prime Minister whom he has accused of corruption in the purchase of 36 Rafael jet fighters from the French company Dassault.

2018 the year proved lucky for Rahul as he came into his own as a campaigner and strategist, thus emerging as a powerful voice in the opposition against Modi.

Focusing  on farmer’s distress ,unemployment and the Rafael deal and on the issue of corruption more than anything else he has rightly captured the imagination of voters across the country.

Rahul has taken pains in strengthening the organisation as well.

He has rightly decentralized work among younger leaders and created weekly review of the work allotted.

Rahul has learnt nuances of administration by advising young leaders to remain patient and wait for their turn, and showed maturity by choosing the senior leaders like Baghel, Ashok Gehlot and Kamal Nath as chief ministers of the newly won states.

The recent surveys in all its probabilities has shown Gandhi’s growing acceptability as a challenger to Prime Minister Modi across pan India.

Rahul Gandhi has been successful in projecting himself as friend of the poor and needy, fighting for the causes linked to common man attacking PM Modi on such issues, thereby  promoting  himself as the leader of the masses.

The battle of 2019 LokSabha election is going to be a tough one and the dice is cast.

Who wins the race is the million dollar question to be answered by the people of India soon.

10 thoughts on “THE METAMORPHOSIS OF A LEADER.”