Travelling is normally a passion with me but travelling with family is not only exciting but pleasurable adventure as well.

The impetus for undergoing this joyful journey was my sister–in-law Bitty and her, elegantly dressed husband, Shahji , who visited us for a brief holiday in Pune.

Retired newly from Bank’s thirty five odd years’ job dredgery Bitty was more exciting for a visit to Mahableshwar and implied upon her choice with finality.

The other ones who joined the group were my Brother –in – law Roopji ,his flamboyant wife Girija ,glamorous young Bunty, my sister’s daughter , his handsome husband Sunilji and his revered father, Ratanlal Daftariji.. The group swelled to a large one with  my darling wife Sharika,charismatic daughter Neha and smarty Shiva.Last but not the least Tomboyish Ankit dotting over his grandpa as a special caretaker.

Sunilji and dear Bunty were chosen trip leaders to propel the journey with full gusto. The couple is ardent road traveller who fully understand the nuances very well.

On the D-day we started at 8am hoping we could traverse the distance in about 2/3 hrs maximum .We started off in two cars with Shah ji and Sunilji at the driving seats fully charged to move ahead.

Morning breeze was chilly but later in the day the sun made a merciless laugh as we drove on towards the alluring Sahdhyari Ghats .The grandeur of these mountaneous region is spell bound .The sight of massive traffic dampened our soaring spirits to some extent .“oh my God what is this” said Shahji ,struggling to keep the car moving at the low speed.“I never knew the road is so curvy, bumpy and having such a steep ascend.” He said “I would have not opted to drive”He continued. “Never mind sirji all will be ok” I replied jokingly knowing for sure the going was tough.

I could see an odd number of over hundred cars halting on to the sides cooling off the engines ,hoping against hope we could pull through without much ado.

A sea of cars were going on the curvy zig zag road of the Ghat at a snails pace .It appeared whole of Pune and Bombay had descended on these roads to make a beeline for the coveted hill station –Mahableshwar.

A spectacle of human heads , with big individual bunch of beauties , sauntering on the Ghat roads to have a glimpse of traffic woes while waiting for their vehicles to cool off , was now a constant sight.We realized it could take much more hours before we could reach the chosen destination.

As Shahji was struggling to drive on , jamming ,banging the gears ,I could see a pall of smoke emitting from the bonnet side and advised to keep the car on to the side of the road He parked safely and we jumped out to see some untenable did not happen.

Sunil Sir ,our expert captain after checking the car , confirmed that all was fine ”just to wait to cool off the engine”he reaffirmed .

Just to break the stillness of the tense moment I jocularly pointed out “ Hi Bitty your glowing cheeks and gorgeous complexion do not suggest you  are more than thirty years” “how come you have been retired. Check your credentials .”I continued. She guffawed . I shifted my attention to the young christmatic couple Neha and her smarty Shivas .”Hey Neha looking very upbeat with your Chubby.” “ enjoying the moment “ she replied nonchalantly nimbling at some cookies .

The  wistful saga finally ended we just started off with new resolve to beat the race.

We did reach Maple Garden for a much deserved break , but did not stop but decided to have lunch at Venna Lake ,a more beautiful spot to relax.

We finally could reach out for a covered place ,a look like ‘Baladari’ at Venna Lake and had finally our homely cooked sumptuous lunch .

A time to relax and enjoy the picturesque lake surrounded by thick forests with velvet green mountainous background. 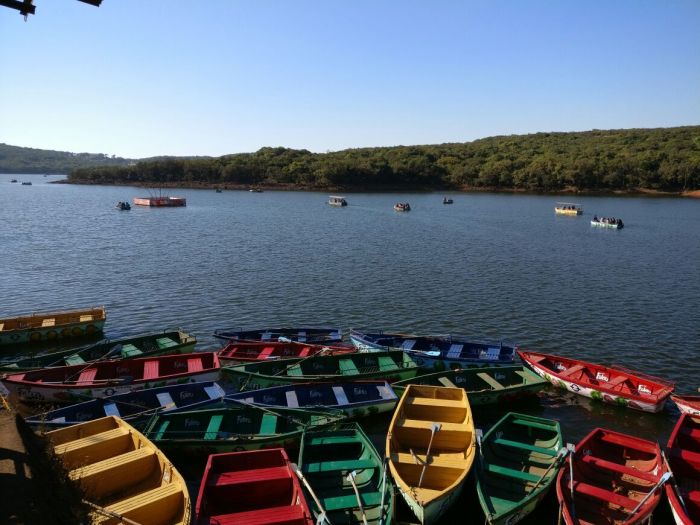 VENNA  LAKE   WITH BOATS  READY FOR THE TRIP.

A lot of boats are anchored and tourists take rounds of the lake after hiring boats as per passenger capacity.

Venna Lake’s shimmering water is crytal clean and falls at the ht of 600ft from Lingmalla Falls. 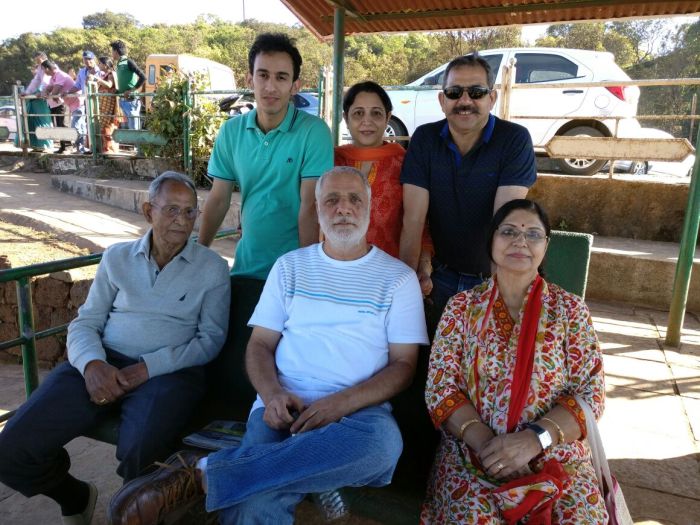 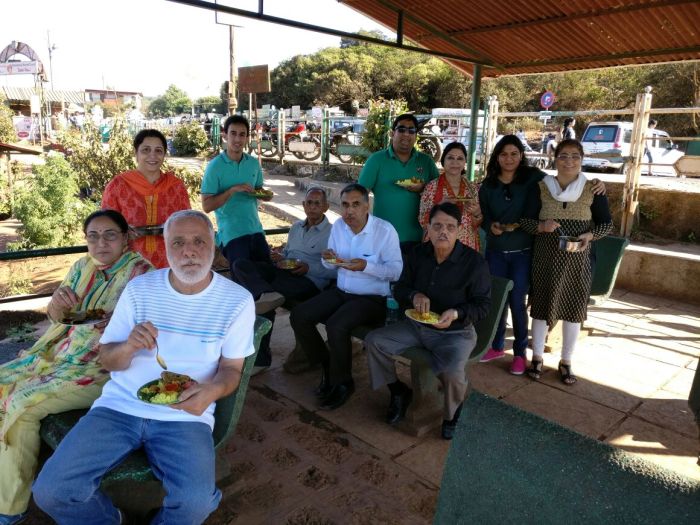 Mahableshwar nearly 120kms from pune , a city of 12,762 population is conglomerate of three villages—Malcolm peth ,Old Khestra, and Shindola village.

Mahableshwar is source of Krishna river that flows across Maharashtra,Telengana and Andhra.

Most of tourists come here to see lord Shivas Temple

The Temple has Shiva Lingam and beautiful statue of Krishna -a small stream flowing from the mouth of cow (goumukh) .

There are other attractions for tourists as well.

Wilson point is 1.5 kms away from the Mahableshwar city . Named after Lesia Wilson who was Governor of Bombay Province from1923 to 1926,

This Point is at the ht of 1439 meters. Here one can see both sunrise and sunset a spectacle of myriad scenes.of sensual ecstasy.

We tried  to see the Shiva temple but the traffic jam could not take us there . It was dusk already and we decide to take return journey as there was no choice or chance to stay overnight. A brief  stopover at Maple Garden for sandwich session was refreshing.

The Return journey  was smooth and  more relaxing.We passed through the great Satara Tunnel and moved at a faster speed to overcome the fatigue.

22 thoughts on “TRAVELS WITH FAMILY”